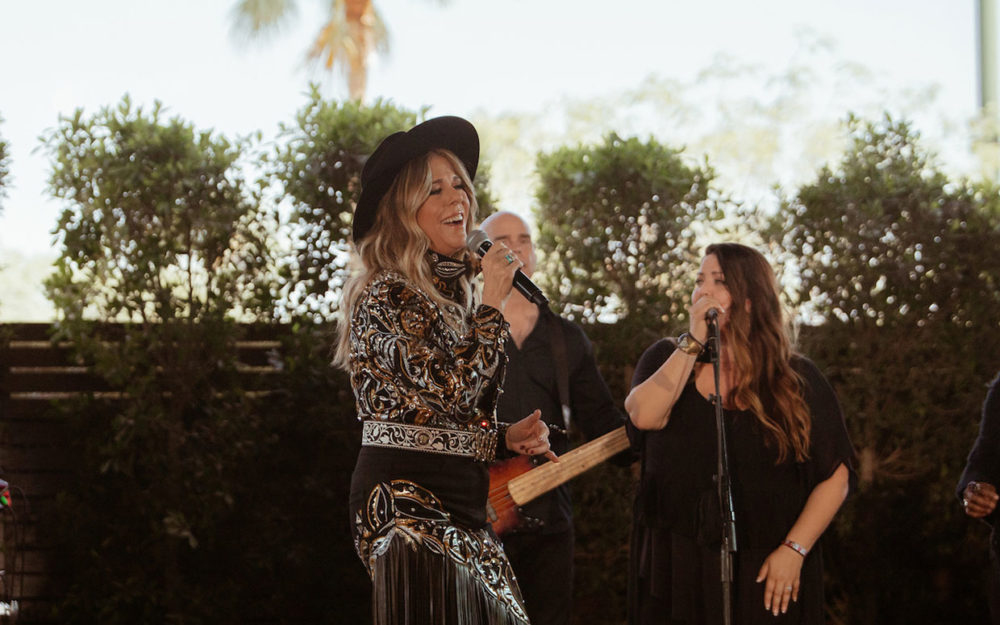 At country’s annual mecca festival Stagecoach 2019 this past weekend in Indio, California, one of our favorite first-timers to the festival, who got her crowd stomping and cheering, was actress and now singer/songwriter Rita Wilson, 52, (best known for her parts in Sleepless in Seattle, Runaway Bride and Jingle All the Way). Out of the blaring 100-degree desert heat, we got cozy on the couch with Wilson, who chatted with us like a BFF, opening up about what inspires her unique blend of SoCal-rock-meets-country-music, the upbeat, healing and empowering female-power messages in her lyrics—and how, for her, great country music is all about great lyrics that tell impactful stories.

What inspired you to be a music artist?

Well, I think it’s a two-part answer. There was a period of when I thought alright, I’ll just do acting. Then a few years ago I did Chicago the musical on Broadway playing Roxie Hart, and I met Kara DioGuardi, who is an amazing songwriter and producer and also had done the play.  I met her because we played the same role, Roxie Hart, and she goes ‘what do you really want to do?’ And I said, ‘well I’d give anything to be able to write a song like you,’ and she said ‘well, what makes you think you can’t?’ I said ‘well, I don’t play an instrument, and it’s been a really long time,’ and she goes, ‘do you have something you want to say, do you have a story?’ And that’s when I went, ‘Oh my gosh, you have no idea’. So she said ‘I’ll write your first songs with you,’ and she introduced me to songwriting.

Then the second person was Kristian Bush from the band Sugarland, who said he was going to write with me when I opened for the band, and that kinda opened the flood gates. So when I started writing between Nashville and Los Angeles, I just started writing and writing and writing, and just couldn’t stop writing. And that was the difference, I think, because I thought I was writing songs for other people to sing—and then I thought, “I think I’m writing an album I might be singing.’ I was confused, and then I decided I’d do my first album of my original music, and now I’m on my fourth, Halfway to Home.

Country is a lot about ‘I lost my girlfriend, I lost my dog, I lost my truck, I lost my job,’ and I feel as though you’re speaking personally to me and all of us women out there in the audience. I sort of want a break down! You know, a few days’ rest in the hospital, nothing too serious, just to be in bed and have people take care of me.

You had the women in the Stagecoach crowd hollering in appreciation when you pointed out there shouldn’t be a size 00 because it’s not even a number! And your songs like “Oh, No, You Didn’t” and “Rule Breaker” have such raw honesty about what women really deal with and put up with every day. Are you intentionally songwriting to reach women, or singing about them in the context of your own life?

I don’t really think about who I’m trying to reach when I’m writing, I really just try to write the story and tell the truth, and hope that it finds an audience. Of course, I do love my women people! I love them! So, I do have some things to say about what it’s like to be a woman, especially because you’re suffering so many indignities almost constantly as I sing about on “Oh, No, You Didn’t,” and almost a sense of being invisible sometimes. And that’s something I hear a lot about from women. Young women and women of all ages are feeling that. I do try to tell the truth more than anything, and stories come from all different places.

On the new album Halfway to Home there’s a song called “New Girl,” and that was inspired by a girlfriend of mine who got a text from her husband that said: ‘I love you so much, don’t worry, everything is gonna be OK, and by the way my wife’s going away for the weekend.’ Basically he thought he was texting his girlfriend, but sent it to his wife. And I thought, ‘oh boy.’ I couldn’t stop thinking about that, and my girlfriend handled it so beautifully. So, I thought what if you were going to have that conversation with that woman, like you ran into her somewhere. What would you say? So [Nashville songwriter] Emily Shackleton and I we wrote this song called “New Girl,” and it’s about that. It’s like, some guys are just gonna do it over and over again.

You’re a Cali girl, you grew up in Los Angeles and your music is described as SoCal rock meets country. Who inspires you musically? Were you always a country fan? Who did you listen to that you love?

It was everyone from Linda Ronstadt, Joni Mitchell, Eagles, Fleetwood Mac, James Taylor, Carol King, Dolly Parton, Johnny Cash, Beatles, Beach Boys—those influences were everything that I was exposed to growing up. But I’ve always, always been attracted to country because of the stories. But it’s really the story in any song, even if you think of The Beatles’ “She’s Leaving Home.” You know, ‘Wednesday morning at 5 o’clock.’ I’ve always thought what is happening to that girl, and where are her parents and why can’t they find her and who’s the guy from the motor trade?! That scared me. Or you have ”Love Child” from Diana Ross, and she’s talking about out-of-wedlock baby, I think that’s amazing; Johnny Cash’s “Boy Named Sue,” Dolly’s song “Jolene,” Bobbie Gentry’s “Ode to Billie Joe.” All those songs mystified me and mesmerized me, and that’s what I was always attracted to: what’s the story in this song?

Many of your songs seem to have a healing sensibility. I felt really empowered listening to you, like ‘Yeah, it’s OK that I cry at night!’ Because a lot of people, not just women, are seeking that.

Thank you! That’s so, cool. Yes. “Throw Me A Party” I wrote because I had had breast cancer and when I first got the diagnosis it scared me, really to my core. And before you know what your prognosis is going to be and that you’ll be good and playing at places like Stagecoach [she beams], I said to my husband: ‘Look, if something should happen and I go before you, just please be sad for a very long time, but throw me a party. I want to have a big celebration and I want alotta music, and I want dancing and good food. And then when I did the music video for that and posted it, what was interesting to me was that so many people have thought about what they want to do when they go. I kinda thought I was opening up this deep dark side of myself, and you realize that people do think about their death—especially if you’ve had any brush with it, or you’ve lost a family member or a child. I was surprised by people responding to the song the way they did.

It’s clear you have such a supportive family. Your son Truman Theodore (23 and Wilson’s youngest with her husband of 31 years, actor Tom Hanks) was on a friend’s shoulders grinning at you and dancing through your entire set!

He was so funny! He was mouthing to me, ‘I love you, Mom!’ He was sosweet. What a doll!

Scanning around assuming Tom was somewhere in the crowd, he was so obviously trying to be incognito with his scruffy long grey beard, straw hat and dark glasses, to let you have the limelight. But it so wasn’t working!

Yesss! [Wilson giggles]. Well, he does have that beard now, which is a little bit helpful!

So you’re at Stagecoach, the mecca festival of country music fans. How does that feel?

You know honestly, what a blessing. I’m so happy. I don’t take anything for granted. I feel very fortunate and very blessed to be here, and grateful for the people who are responding to my music that allows me to be here. I love it. It’s a celebration, for sure.

What’s next, are you hitting the road on tour?

Yes, I’m touring with Kristian Bush and we’re doing a bunch of festivals; CMA festival and Lakeshake—the three-day festival (June 21-23) in Chicago with an all-female lineup the first day, including Maren Morris, Miranda Lambert, Cassadee Pope, Lauren Alaina, and more. It’s got some reallygreat women. Come to that. Come to that, Parade! I think that’s going to be really fun.